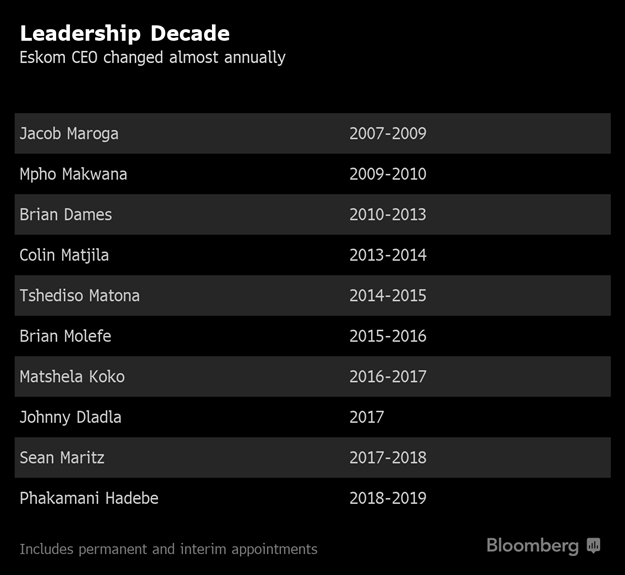 Eskom’s 96-year history is replete with former chief executive officers who rose from within the debt-laden state utility to run the company. There are few obvious choices for the next CEO to come from those same ranks.

Two possible candidates from Eskom’s executive team to replace Phakamani Hadebe have strengths but also weaknesses. Chief Financial Officer Calib Cassim is a chartered accountant who’s worked at Eskom for 17 years, yet he has little technical expertise. Chief Operations Officer Jan Oberholzer, who has held a range of jobs during a quarter century at the utility, may not have the financial experience to steady its shaky finances.

The new CEO will need political clout and connections to navigate Eskom’s complex relationship with the government, which plans to break the utility up into three units. The state has also been reticent to give it the money it says it needs to remain solvent, or the go-ahead to fire excess staff.

”Generally when a company is in a mess, you appoint a CEO from outside,” Jannie Rossouw, head of the University of the Witwatersrand’s school of economic and business sciences in Johannesburg, said by phone. Within Eskom, ”the cupboard is fairly bare and their choices are indeed very limited,” he said.

Eskom didn’t immediately respond to a request for comment about internal candidates for the position.

A failure to invest in sufficient new capacity and maintenance has left Eskom struggling to supply enough power to the South African economy and it’s saddled with more than R500bn in debt that it’s battling to service. Hadebe last week announced that he is quitting at the end of July because his health is suffering due to the ”unimaginable demands” of the job. He will be the 10th CEO to leave in as many years.

Hadebe, whose previous experience includes managing South Africa’s land bank and helping oversee assets and liabilities at the National Treasury, was an external appointment but his three predecessors came from within Eskom’s ranks. Brian Molefe, who served as CEO from mid-2015 to late 2016 was from outside the company but within the wider state structure – he was previously head of Transnet, the state-owned freight rail, ports and pipelines company.

”Somebody inside a company doesn’t normally have the ability to fix it because you know too many people in the organisation,” Rossouw said. ”When you come from the outside you just think numbers.”

Eskom’s board, which is yet to advertise the CEO post, said in a statement it was committed to ensuring the utility has a stable leadership and it would engage with Hadebe over the next two weeks to ensure there was continuity and a steady transition.

The board is yet to decide what kind of leader they want for Eskom, and the appointment of a chief restructuring officer is also being discussed between the company and the National Treasury, analysts at FirstRand Bank said in a note to clients, following an Eskom investor call.