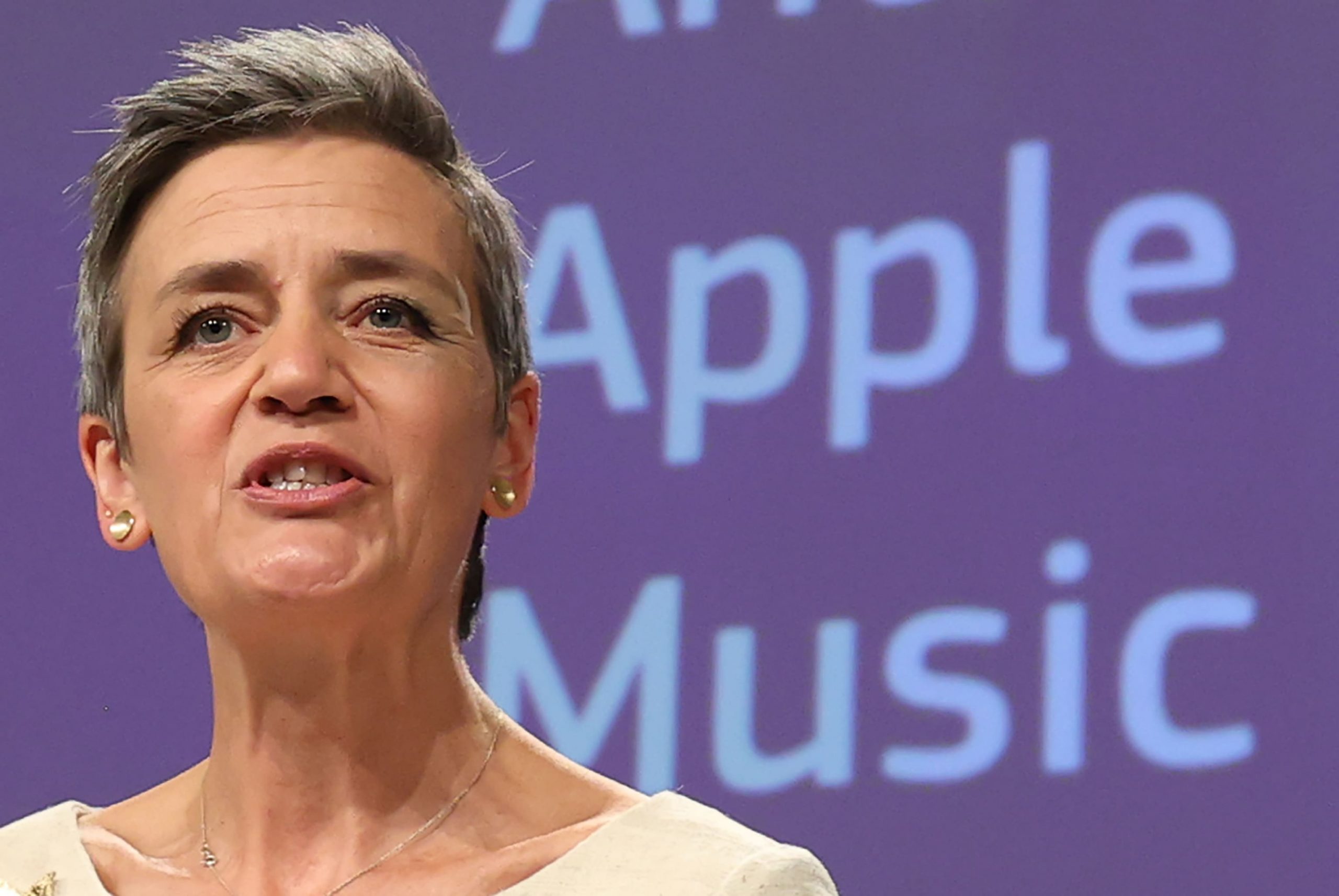 Executive Vice-President of the European Commission for a Europe fit for the Digital Age (Competition), Margrethe Vestager, holds a press conference on “Apple on App Store rules for music streaming providers” in Brussels, Belgium on April 30, 2021.Dursun Aydemir | Anadolu Agency | Getty ImagesFor a long time, the European Commission seemed to stand apart from the U.S. in cracking down on tech giants with antitrust fines against Google and privacy rules like the General Data Protection Regulation.But when EU competition policy chief Margrethe Vestager announced Friday a preliminary finding that Apple has abused its dominant power in the distribution of streaming music apps, the U.S. finally seemed poised to move in a similar direction.”The Commission’s argument on Spotify’s behalf is the opposite of fair competition,” Apple said in a statement following Vestager’s announcement, referring to the music streaming company that raised the competition complaint. Apple said Spotify wants “all the benefits of the App Store but don’t think they should have to pay anything for that,” by choosing to object to its 15-30% commission on in-app payments for streaming apps.Apple isn’t currently facing any antitrust charges from government officials in the U.S. and such a lawsuit may never materialize, though the Justice Department was reportedly granted oversight of the company’s competitive practices in 2019. But even if the government declines to press charges, recent actions in Congress, state legislatures and in private lawsuits demonstrate a significant shift in the American public’s sentiment toward Apple and the tech industry at large.When the commission slapped its first record competition fine against Google in 2017, it wasn’t yet clear that the U.S. might be ready to move on from its once-cozy relationship with its booming tech industry. But in 2018 — on the heels of the revelations of how Facebook user data was used by analytics company Cambridge Analytica during the 2016 election, and increasing questions about how tech platforms can impact American democracy — that seemed to change.Now, as Europe continues to move forward with its probe into Apple, the U.S. no longer seems to be so far behind.Here’s where Apple stands to face risk of antitrust action or regulation in the U.S.:DOJThe DOJ has already moved forward with a massive lawsuit against Google, so it could take some time if it decides to ramp up a probe into Apple. Though the DOJ’s Antitrust Division took on oversight authority of Apple in a 2019 agreement with the FTC, according to a Wall Street Journal report, the Google investigation has seemed to take priority.Still, then-Attorney General Bill Barr announced later that year that the DOJ would conduct a broad antitrust review of Big Tech companies.Any action from the DOJ or state enforcers would take the form of a settlement or lawsuit, which would put Apple’s fate in the hands of the courts.Private lawsuitsThe popular video game “Fortnite” by Epic Games is pictured on a screen in this picture illustration August 14, 2020.Brendan McDermid | ReutersApple’s most immediate challenge in the U.S. has come from private companies bringing antitrust charges against its business in court.The most notable of these lawsuits is from Fortnite-maker Epic Games, which is set to begin its trial on Monday. Epic filed its lawsuit with a PR blitz after challenging Apple’s in-app payment fee by advertising in its app an alternative, cheaper way to buy character outfits from Epic directly, violating Apple’s rules. That prompted Apple to remove Fortnite from its App Store. Epic filed the suit shortly after and Apple filed counterclaims against Epic for allegedly breaching its contract.”Although Epic portrays itself as a modern corporate Robin Hood, in reality it is a multi-billion dollar enterprise that simply wants to pay nothing for the tremendous value it derives from the App Store,” Apple said in a filing with the District Court for the Northern District of California in September.CongressSen. Amy Klobuchar, D-MN, asks questions during a hearing of the Senate Judiciary Subcommittee on Privacy, Technology, and the Law, at the U.S. Capitol in Washington DC, April 27, 2021.Tasos Katopodis | Pool | ReutersJust last week, several app-makers testified before the Senate Judiciary subcommittee on antitrust about the alleged anti-competitive harms they’ve faced from restrictions on both Apple and Google’s app stores.Representatives from Apple and Google told lawmakers they simply charge for the technology and the work they put into running the app stores, which have significantly lowered distribution costs for app developers over the years.But witnesses from Tinder-owner Match Group, item-tracking device-maker Tile and Spotify painted a different picture.”We’re all afraid,” Match Group chief legal officer Jared Sine testified of the platforms’ broad power over their businesses.The witnesses discussed the seemingly arbitrary nature by which Apple allegedly enforces its App Store rules. Spotify’s legal chief claimed Apple has threatened retaliation on numerous occasions and Tile’s top lawyer said Apple denied access to a key feature that would improve their object-tracking product, before utilizing it for Apple’s own rival gadget, called AirTag.Tile said that while Apple now makes the feature available for third-party developers to incorporate, accessing it would mean handing over a significant amount of data and control to Apple. Apple’s representative said its product is different from Tile’s and opening the feature in question will encourage further competition in the space.Senators at the hearing seemed receptive to the app developers’ complaints, which build on earlier claims made before House lawmakers. The House Judiciary subcommittee on antitrust found in a more than year-long probe that Amazon, Apple, Facebook and Google all hold monopoly power, and lawmakers are currently crafting bills to enable stronger antitrust enforcement of digital markets.State Legislatures