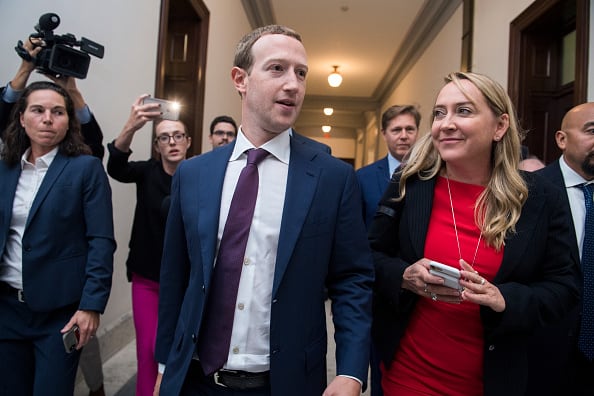 In the past year, since Facebook CEO Mark Zuckerberg’s last official visit to Washington, D.C., lawmakers around the world have scolded the executive for failing to give them face time.

But this week, Zuckerberg suddenly made himself extremely accessible to U.S. lawmakers and even President Donald Trump. During a surprise visit to D.C., Facebook was the one requesting meetings, including a Wednesday night dinner between Zuckerberg and a group of senators, some of whom have threatened regulations that could fundamentally change his business. Over the next two days, he met with several more lawmakers, including one who suggested he sell two of Facebook’s most successful acquisitions before regulators potentially try to force a breakup.

It’s quite a change from 2017, when Zuckerberg didn’t even show up to the first congressional hearings about foreign powers using Facebook to try and influence the 2016 presidential election. Now, as the investigations and multi-billion dollar fines pile up, Zuckerberg seems to realize that things are getting serious. Following his meeting with Zuckerberg, Sen. Mark Warner, D-Va., said the CEO seems to understand that self-regulation is no longer on the table.

If Zuckerberg knows regulation is coming, it makes sense for him to get in front of the people making those laws and try and influence their thinking. Unlike when he testified before Congress, Zuckerberg was not under oath in his meetings with lawmakers. That means any commitments he made to champion a national privacy law or work on election security rely on his word alone.

“They’re going to say it’s a successful trip as long as they improved relationships and they made senators more likely to call Facebook if they have a problem or they’re thinking of legislating in the area,” said Matt Grossmann, an associate professor at Michigan State University who has written extensively about lobbying. “Some of this is part of a long-term strategy and we shouldn’t read into it an immediate policy goal.”

Indeed, Sen. Richard Blumenthal, D-Conn., who sits on the Senate Judiciary and Commerce Committees, said he was “impressed” by Facebook’s interests in internet privacy, though he said he hopes to “continue the conversation.”

Facebook’s play is to “avoid the worst case, rather than achieve their best,” said Grossmann.

“Worst-case scenario is that there’s policy being made that would impact their bottom line and they’re not in the room,” he said. “So they want to ensure that that doesn’t happen by acting open to the policy and posing their own ideas.”

A genuine push for regulation

Zuckerberg’s recent calls for tech regulation stand in stark contrast to Facebook’s former motto of “move fast and break things.” A person familiar with Zuckerberg’s trip said it’s meant to build off of his March op-ed in The Washington Post, outlining his priority areas for regulation. But the acceptance of a new political reality is also a strategic move for Facebook.

Breaking the rules is a fine plan when the system is not set up to deal with a breakthrough industry like technology. But now that lawmakers have woken up to the potential harms of leaving the industry free from regulation, states and countries around the world are working quickly to enact laws that will protect their constituents.

That could prove to be a costly headache for Facebook. As a global company, Facebook would have to choose whether to create a fragmented service to comply with laws in various jurisdictions or serve the lowest common denominator. Facebook is already beginning to face these challenges with the introduction of the European Union’s General Data Protection Regulation and California’s Consumer Privacy Act.

“Companies would always rather have one national standard,” said Lee Drutman, a senior fellow at the think tank New America who researches lobbying. A national bill on privacy, for example, would be not only more efficient for Facebook to deal with, but also likely less progressive than legislation from a traditionally liberal state like California, Drutman said.

As congressmembers on both sides of the aisle push for laws in the tech sector, Facebook may simply hope to be part of the discussion.

“If you’re not at the table, then you’re on the menu,” Drutman said.

While a single chat with lawmakers probably won’t change their opinions, Drutman said a visit from a CEO is a strong signal that the company is taking them seriously.

“That’s like pulling out the big guns,” Drutman said. “It leaves members of Congress with the impression that this is an issue that the company really really cares about.”

On top of that, Zuckerberg has a certain X-factor as a household name.

Grossmann said Zuckerberg’s “celebrity” makes it even more important for him to get familiar with congressmen.

“I think especially in this case where he is both well-known and also been caricatured as a villain in some accounts, it helps to kind of soften the image when you meet someone in person,” Grossmann said.

Seth Bloom, an antitrust lawyer who has lobbied for tech companies including Amazon, said Facebook will not immediately know the impact of Zuckerberg’s trip. But if criticism in Congress cools off, the company will likely consider the trip a success, he said. As a former general counsel of the Senate Antitrust Subcommittee, Bloom said he found CEO visits to be particularly impactful, even if they didn’t sway his judgement.

“The impression is that they were taking the issue that we were concerned about very seriously,” Bloom said. “The impression was that if they said something, they would do it because the CEO was saying it.”

Facebook has suspended tens of thousands of apps after Cambridge Analytica investigation
Bob Iger on why Disney walked away from Twitter: ‘The nastiness is extraordinary’
To Top
error: Content is protected !!
Top